The worker's profile, also known as the worker's details or info page is the hub for all the things related to managing a specific worker. It includes several sections with hardware and software data including statistics in graph form, earnings estimations, as well as alerts, actions, notes and several statuses shown.

Note Open the worker's profile by opening the workers list (article about it) and pressing the eye icon next to the worker.

In this article we'll go over those one-by-one and explore each part in some detail with more details available in linked articles. 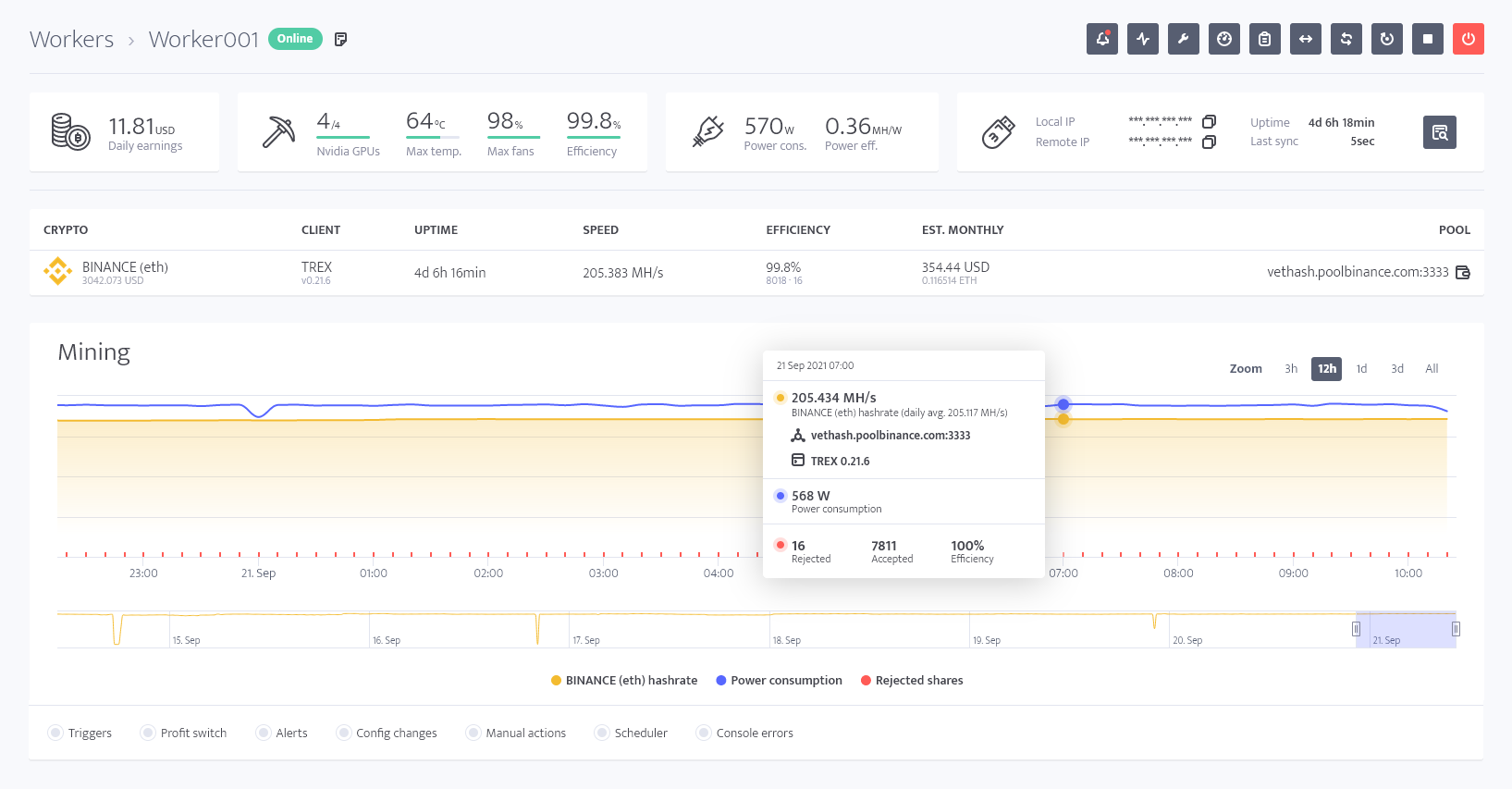 The top left section is the header of the worker. 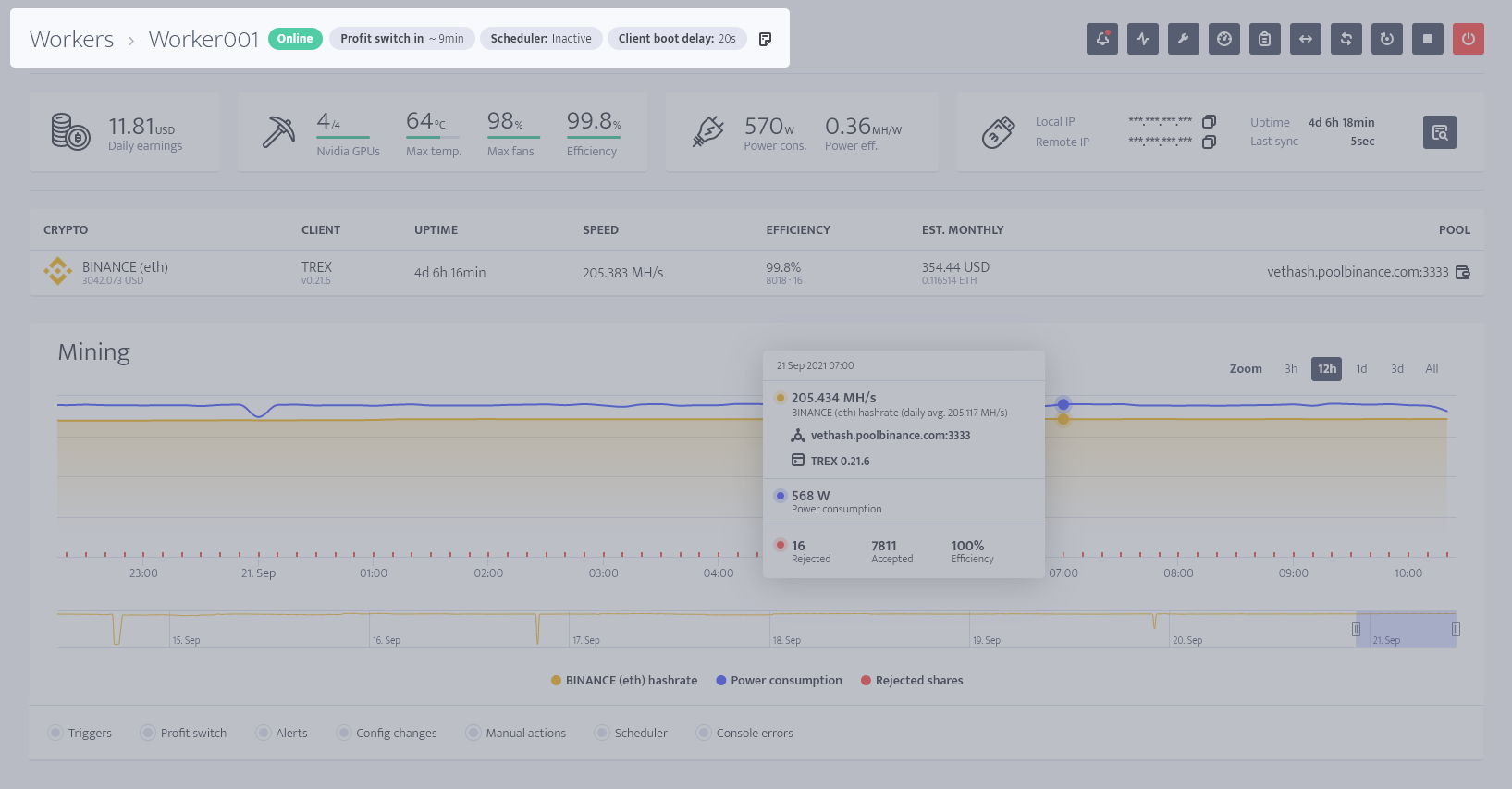 Next to the header there is the block of quick actions. 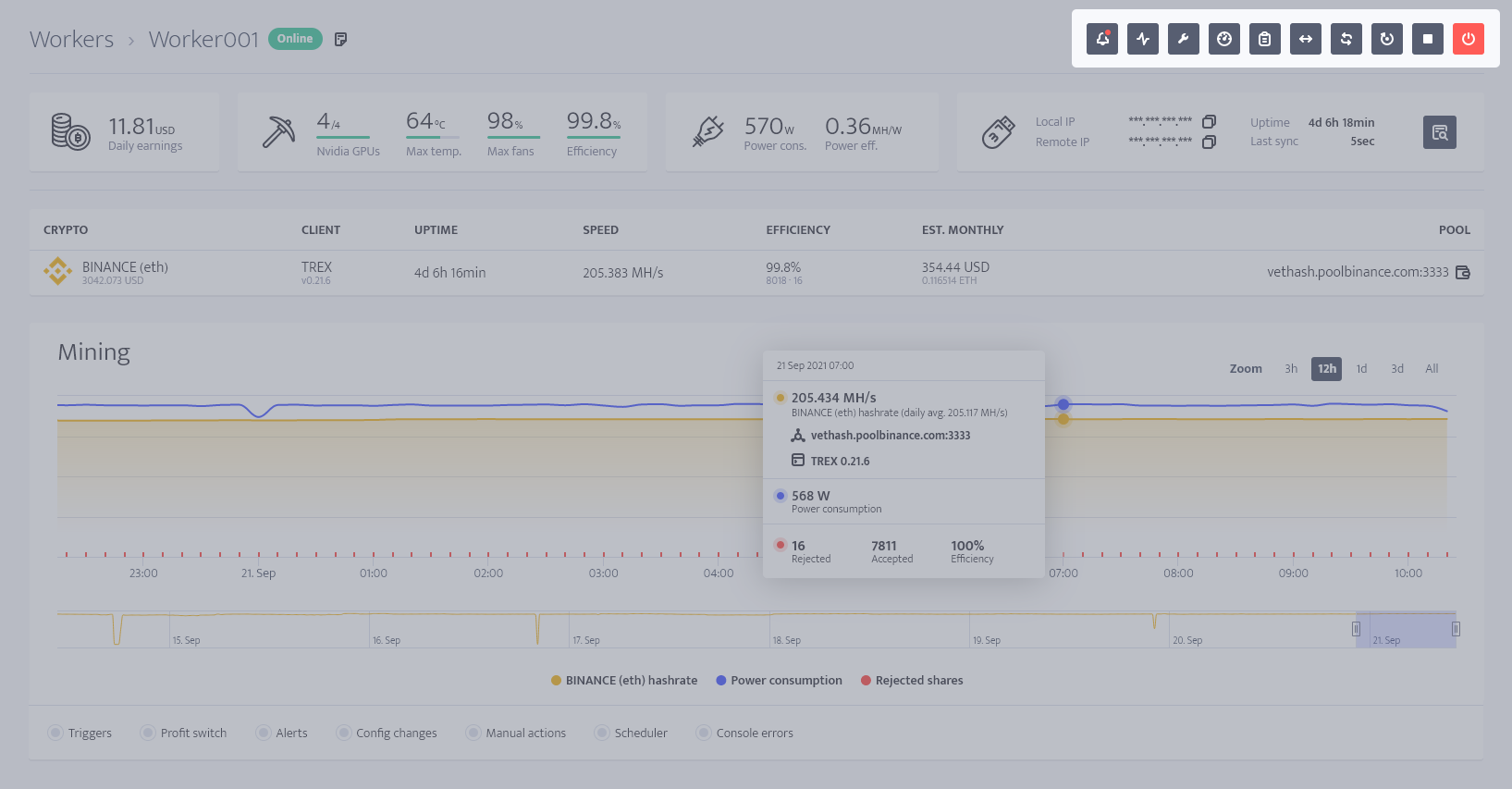 The top section is the overview of the worker. 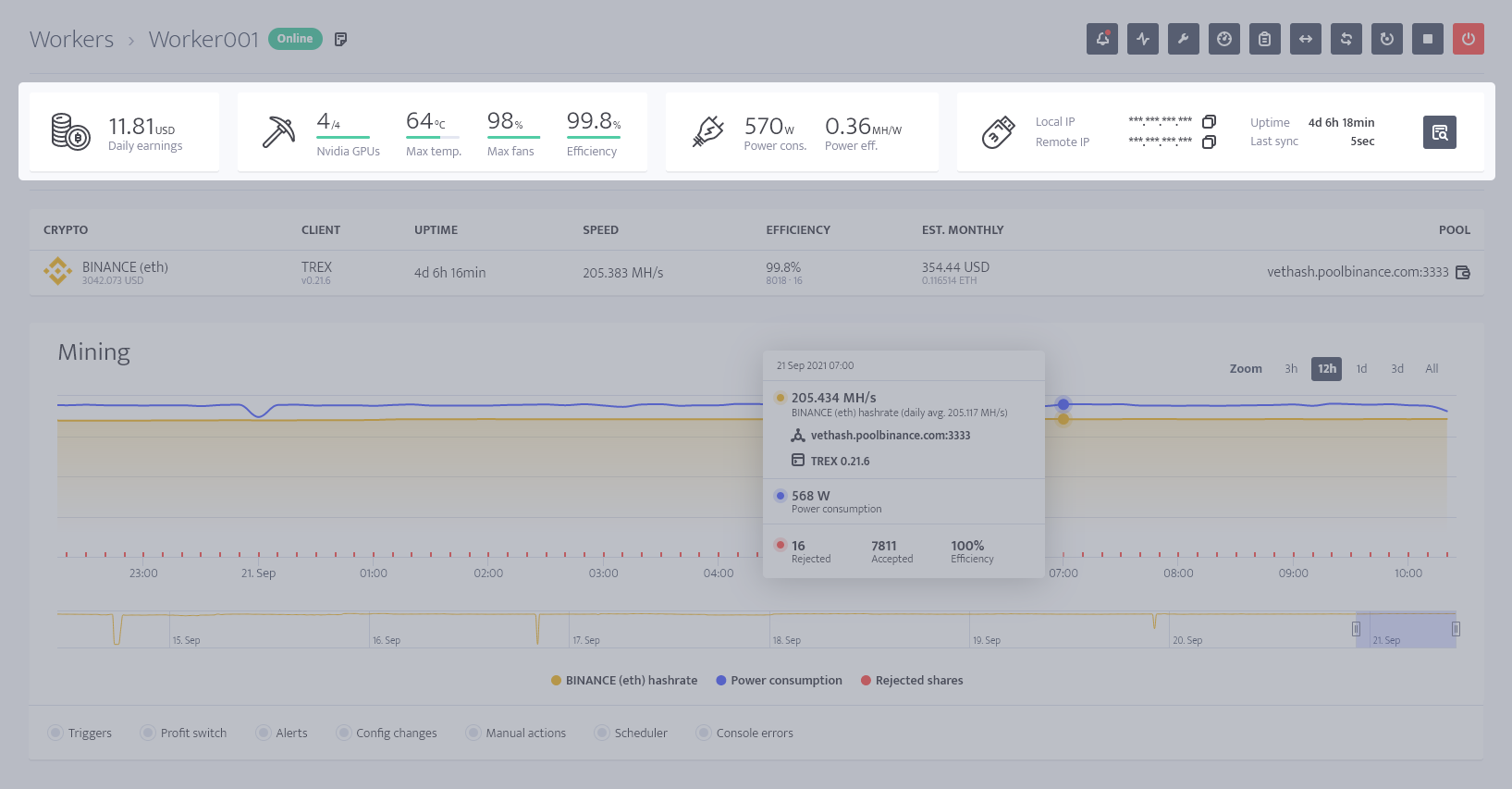 The next section is the one depicting the currency (and it's price) currently being mined by the worker. This includes the client in use, the speed and efficiency, pool address, with a wallet button next to it to open the profile on the pool's website, as well as uptime. 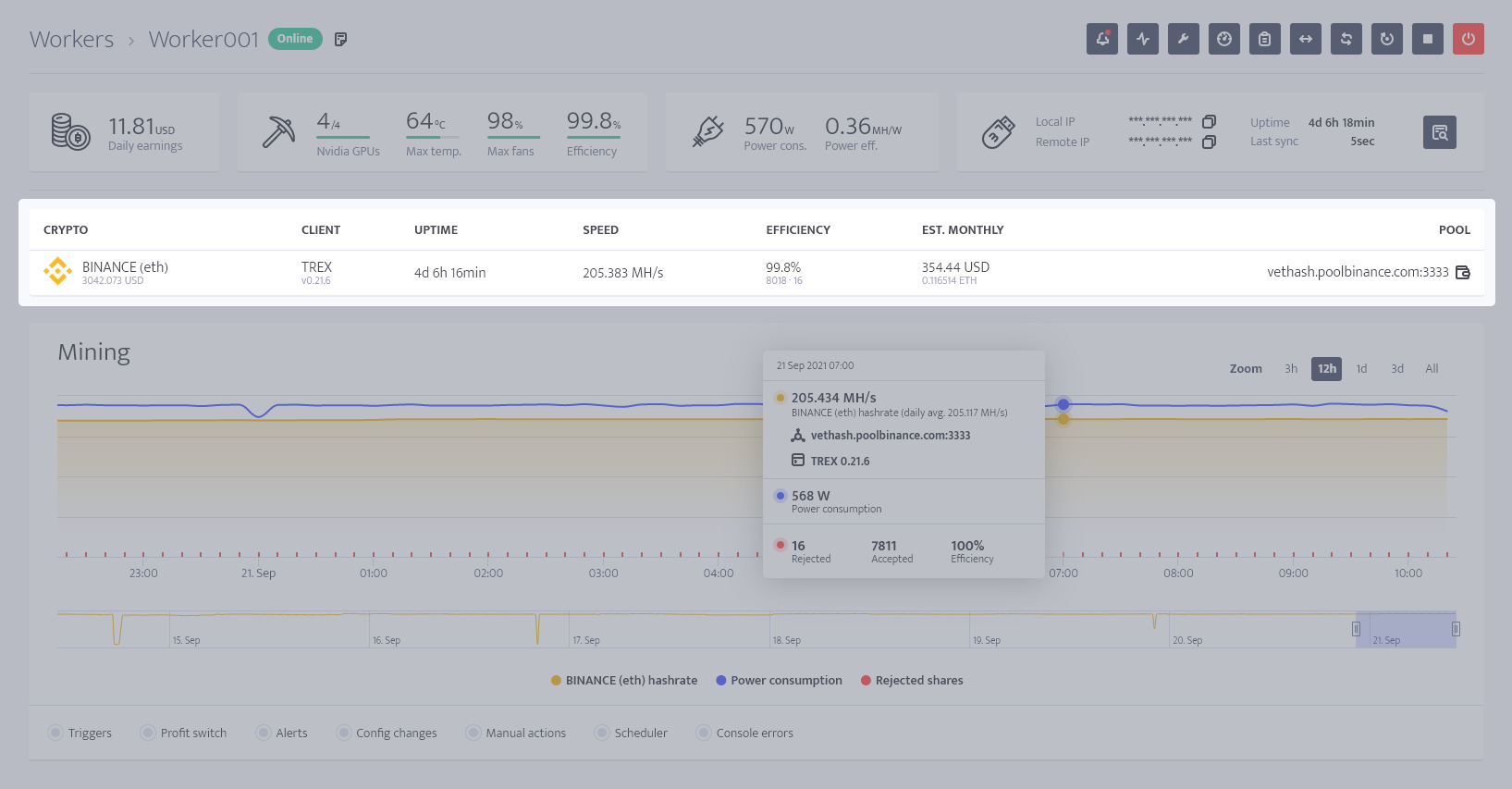 Right under the current сurrency being mined is a graph with hashrate, power consumption of the worker shown in line with 10 minute intervals for each data point. Upon hovering over the graph, details with shares power consumption and efficiency, exact hashrate, pool address and client used pop up, and a timestamp on top of it. 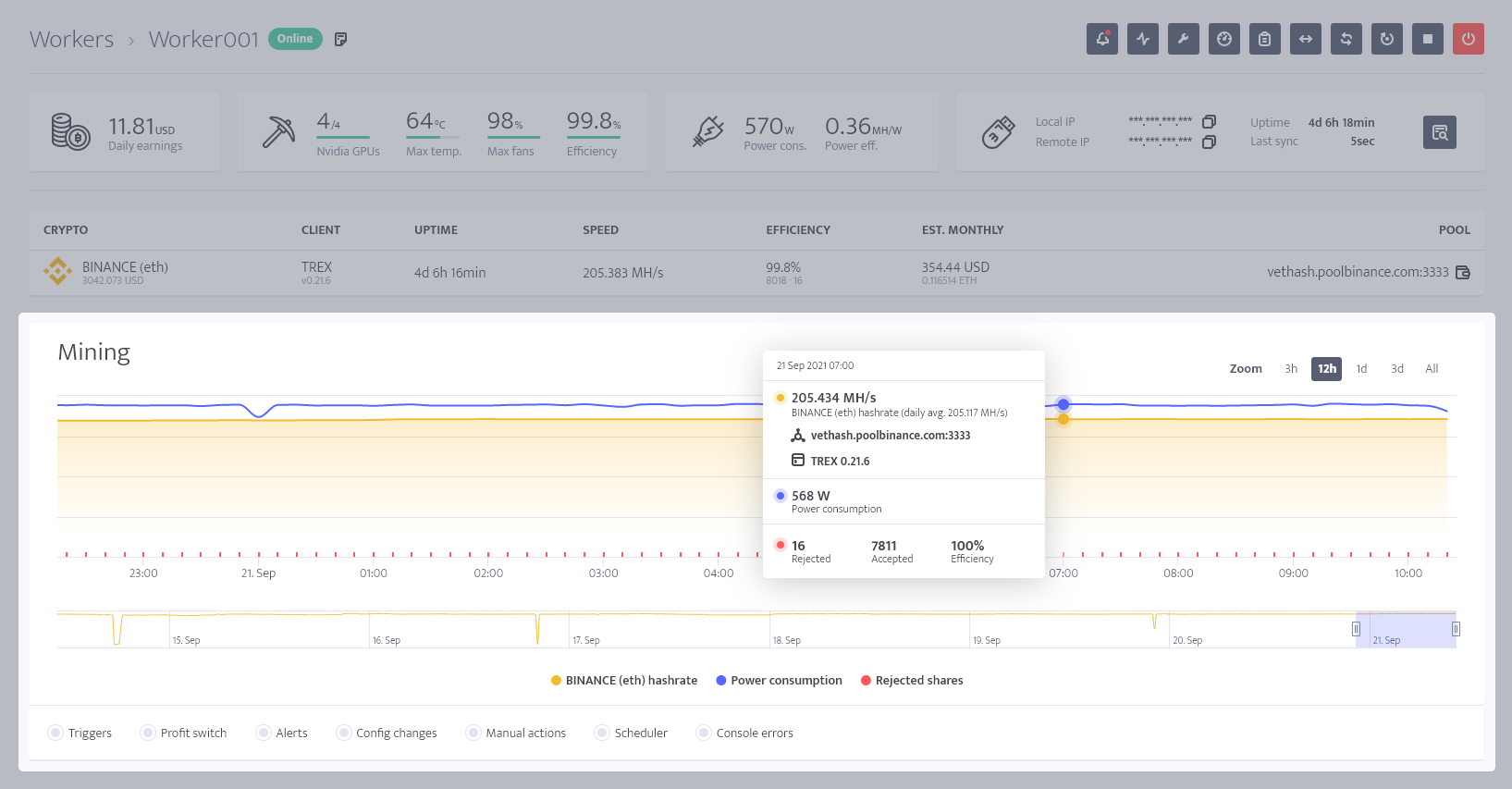 Under the graphs, you can enable various sections of the graph, i.e. Triggers, Profit Switches, Alerts, Config changes, Manual Actions, Scheduler, etc. to be displayed in the graph with timestamps as vertical lines. 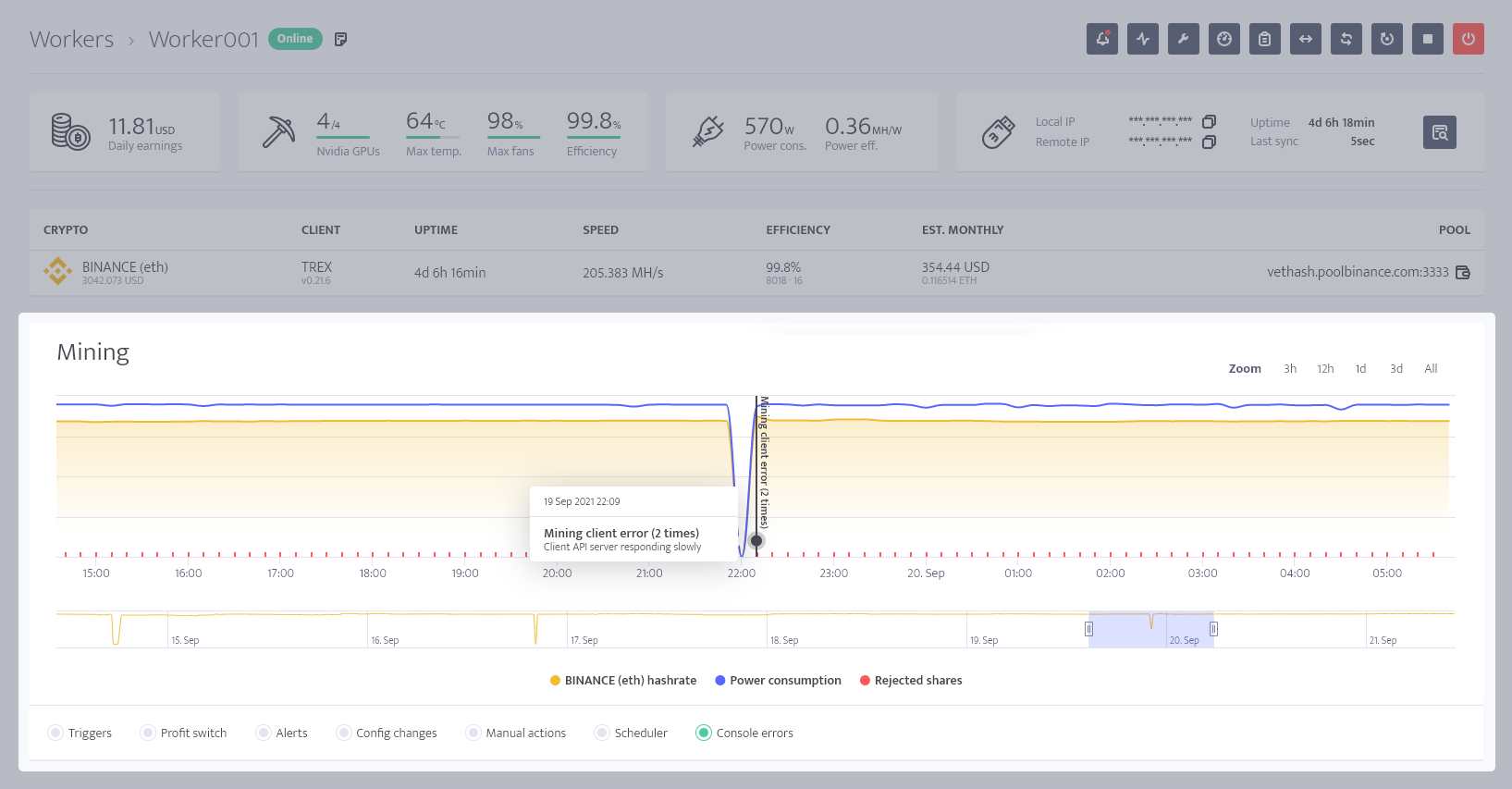 The hardware section includes the models of GPUs (or ASIC boards) used, as well as the stats per-card, reported by the system in case of fan speed, clocks, power usage, and by the miner for individual hashrates and shares found. Each card has Bus ID displayed, and, when available, Bios version, Memory type and manufacturer, memory temperature, min, stock and max power, and max default clocks. 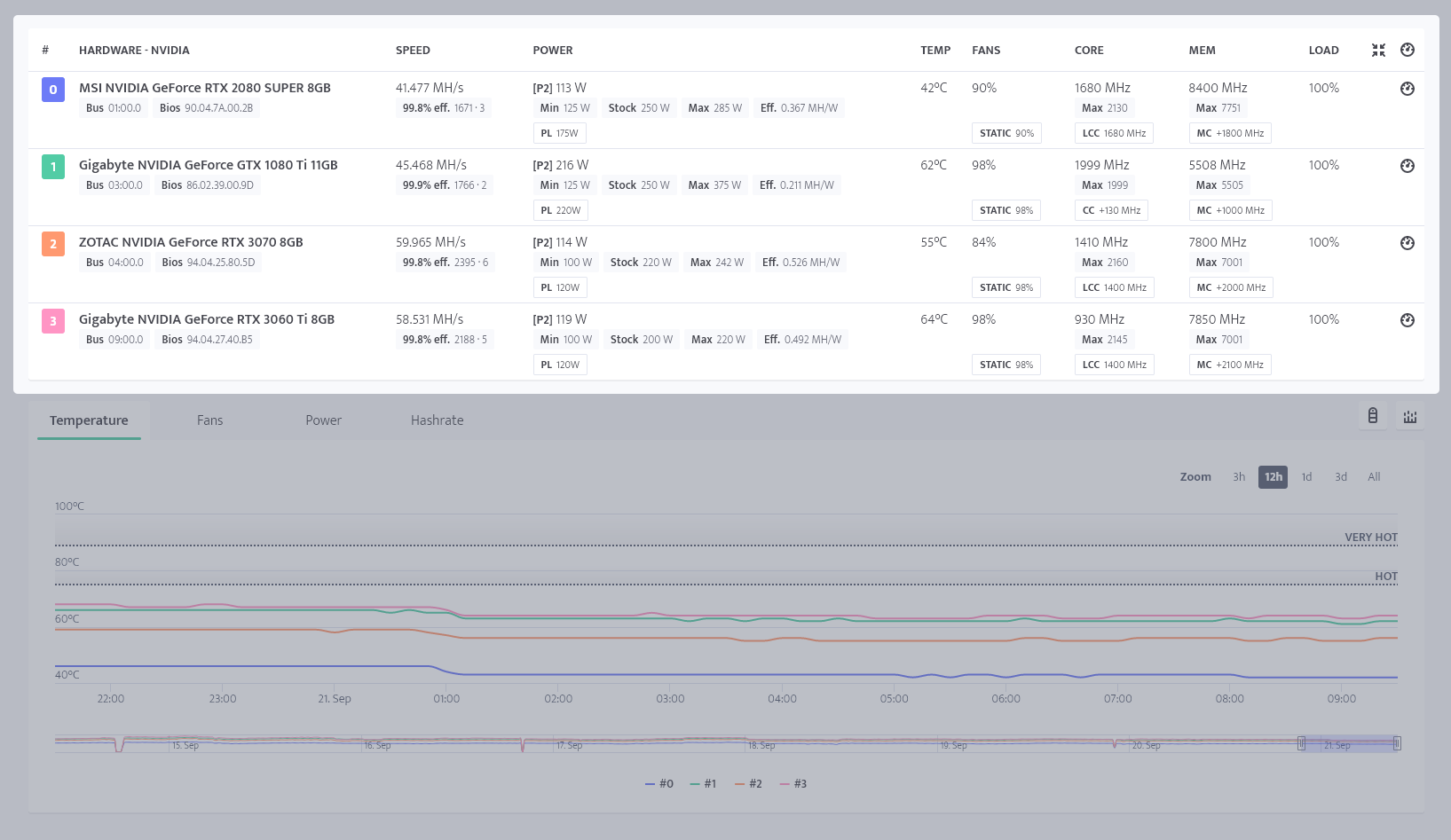 On the right side there are special hardware actions available: 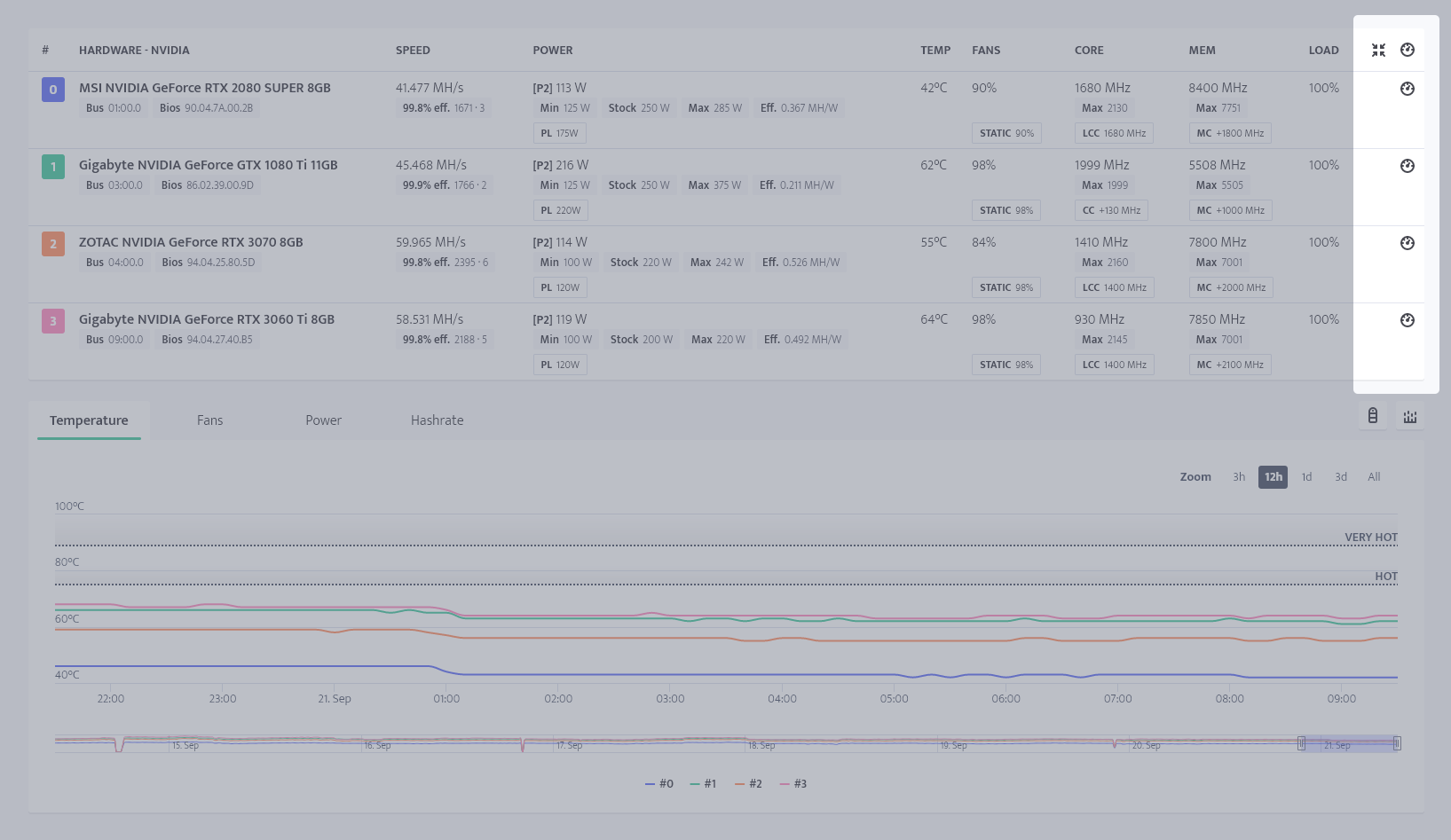 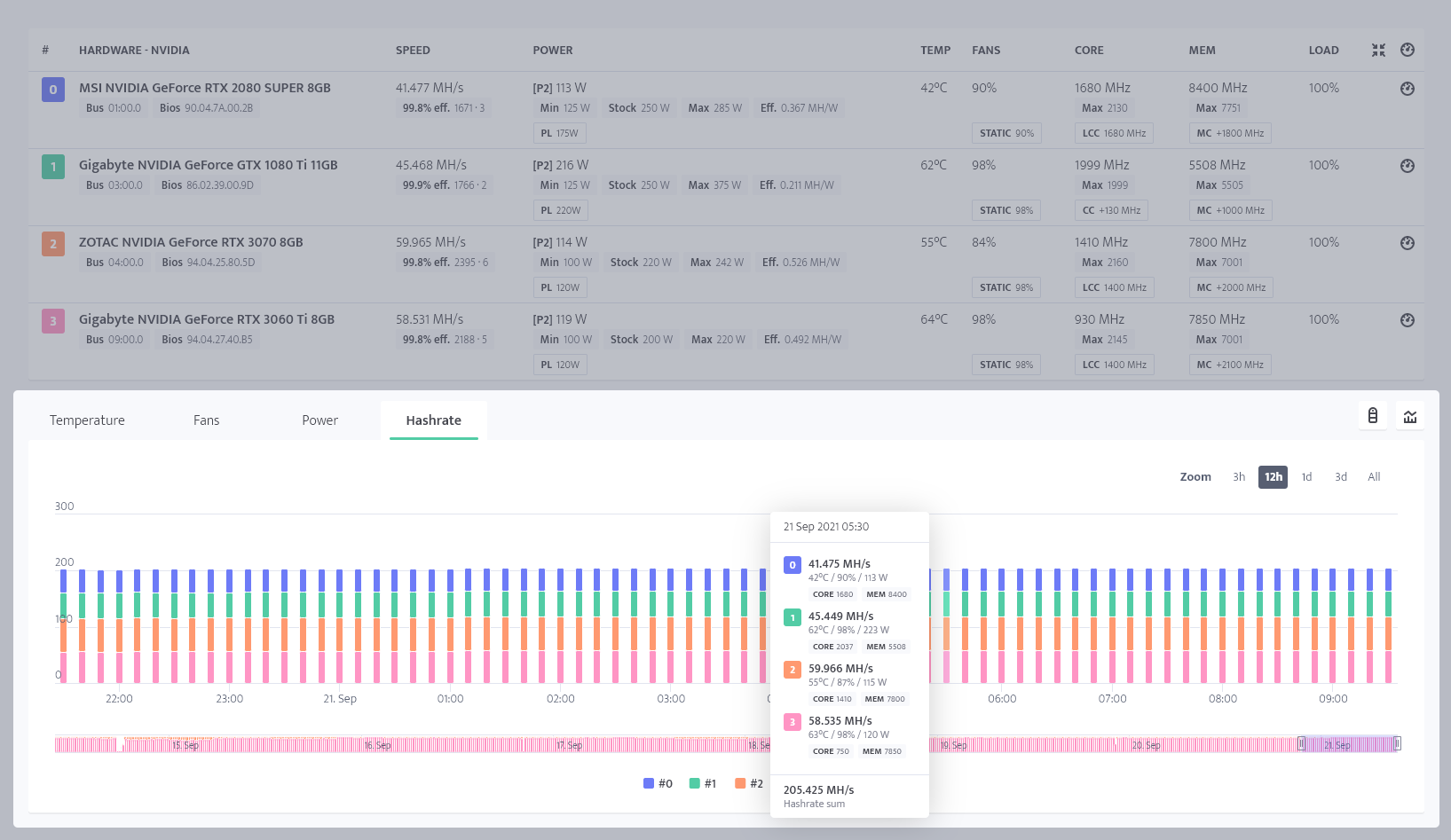 On the right side there are two action buttons for charts: 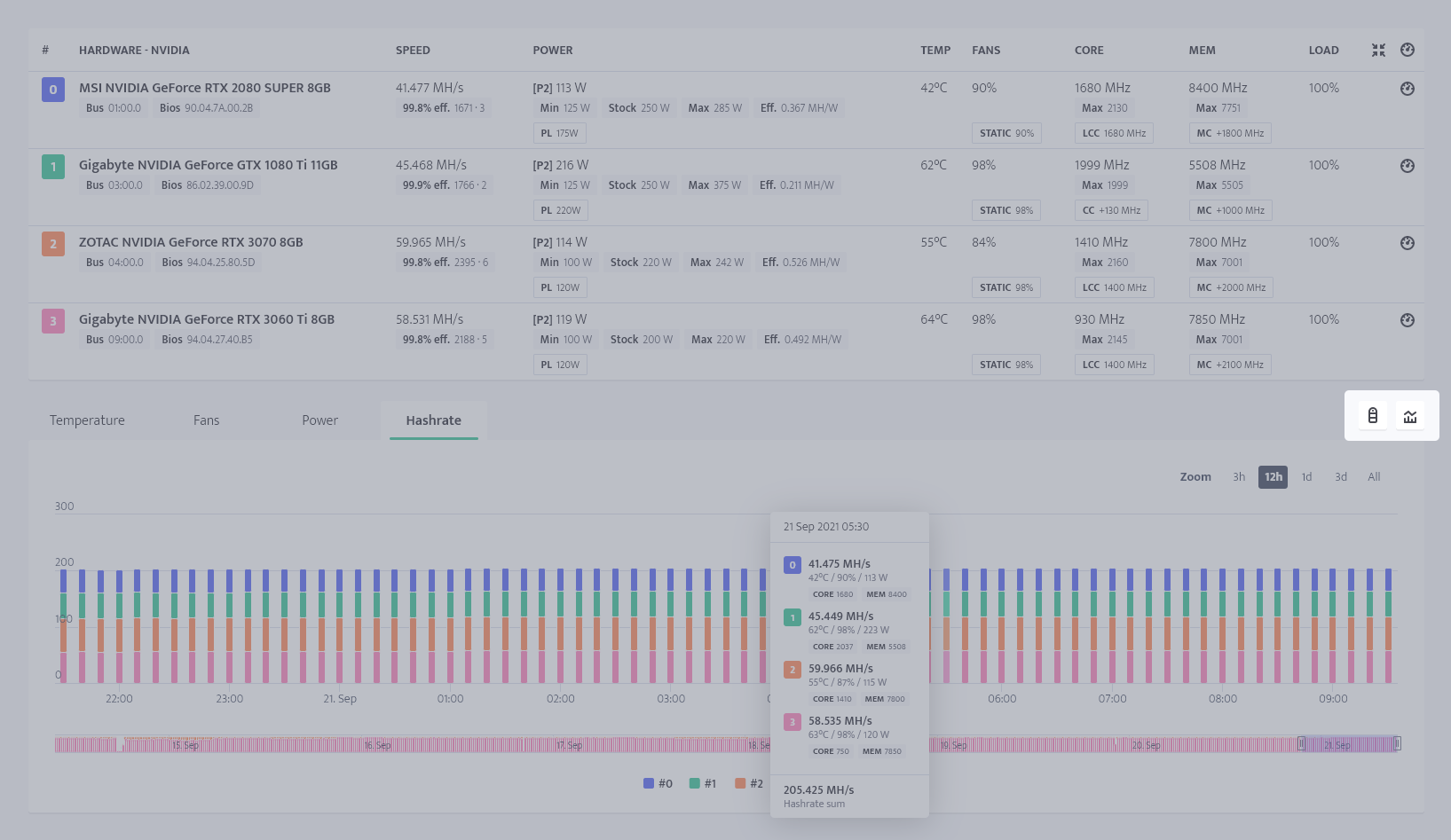 If you had already configured Profit Switch, next to the per-card (or per-board) hardware graphs, the current calculations by profit switch are previewed, upon clicking each individual option, a page opens with profitability data, graphs, calculator available. 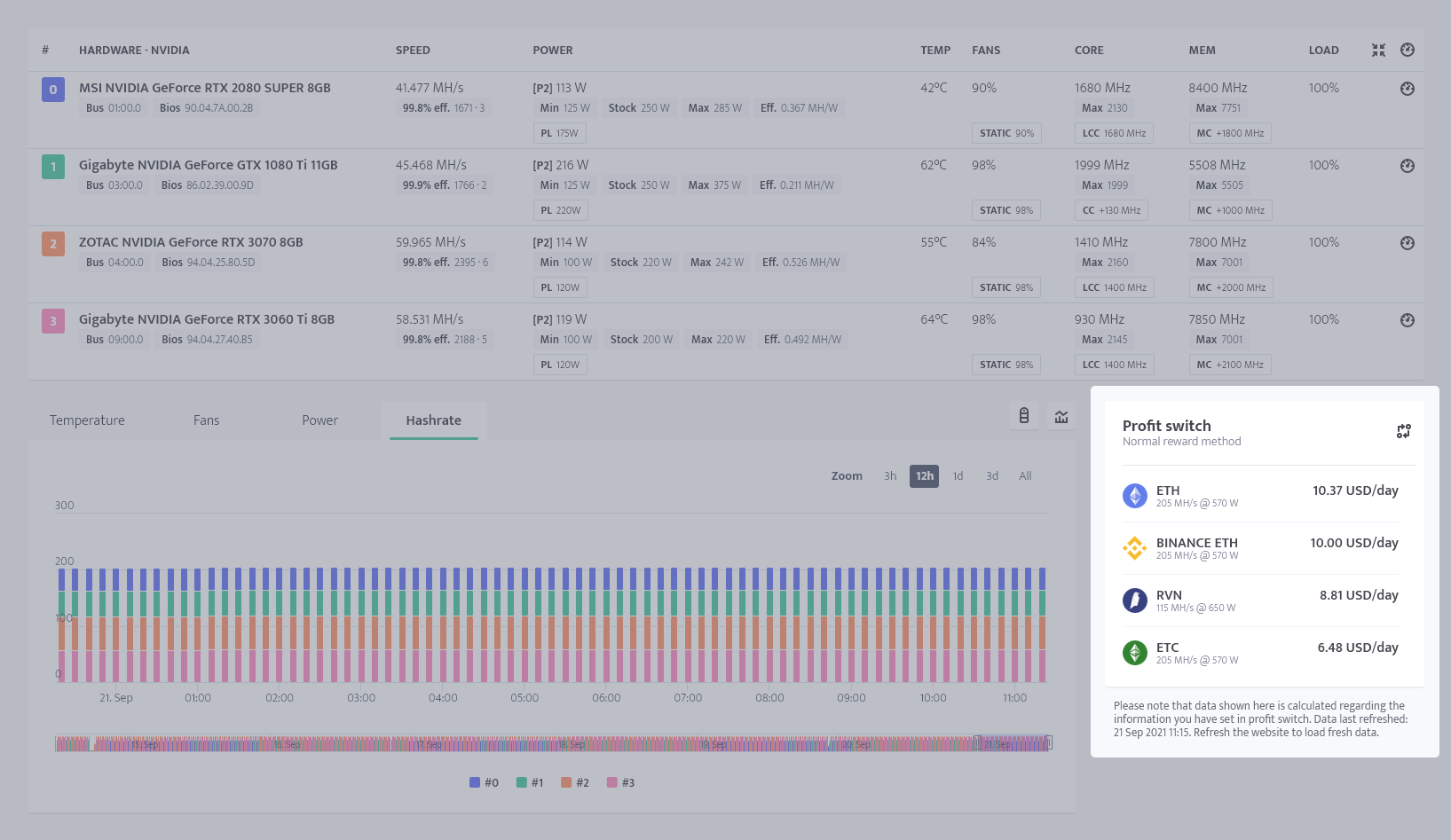