MSI Afterburner is one of the most recognized and used tools for GPU overclocking. It is also a tool that is used with the Windows Node and ClockTune on the minerstat dashboard. 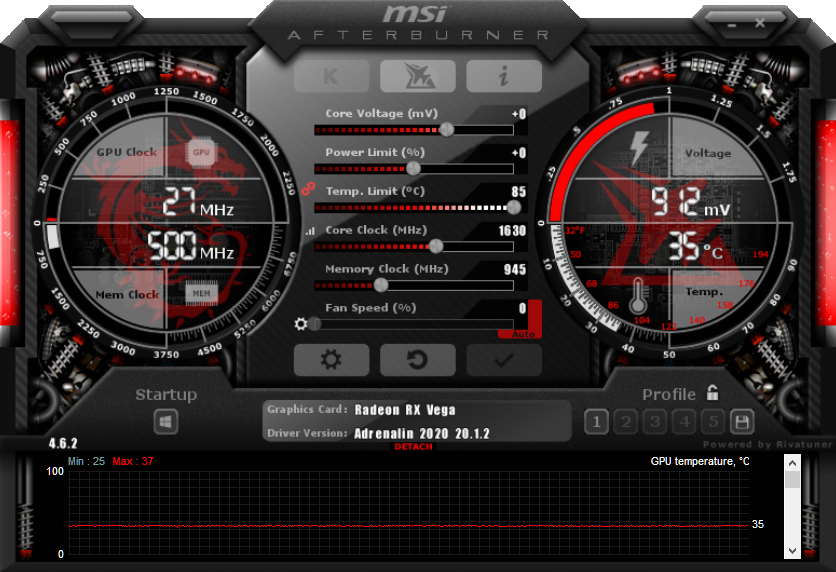 MSI Afterburner is free software and works with both AMD and Nvidia GPUs and allows different settings:

Note There were some reports that MSI Afterburner 4.6 sometimes doesn't accept commands sent from minerstat dashboard to the Afterburner screen. It looks like there are different versions of 4.6 as this is not a case for everyone. We still suggest that you download MSI Afterburner 4.5 instead of upgrading to 4.6 until this issue is completely resolved.

How to use MSI Afterburner

After you install and run MSI Afterburner, you are allowed to set up different settings. If you are using Windows Node, you can set up (almost) the same settings through ClockTune, but make sure that Afterburner is running nevertheless.

Regarding which GPU brand you are using (AMD or Nvidia), different settings will be available:

As for the values to enter, we suggest you follow the suggestions provided by the manufacturer. If you are testing different intensities, we suggest increasing the intensity gradually, starting with safer values first. For RTX 20 cards, MSI offers OC scanner which will find the values for you. You can read the tutorial and users feedbacks here.

Was this article helpful?

Didn't find what you were looking for?

Join us on Discord and get help from our awesome miner community.

Join Discord
We are using cookies to provide statistics that help us improve your experience of our site. By continuing to use the site, you are agreeing to our use of cookies.
Close