Help › Windows › How to use AMD Pixel Patch?

How to use AMD Pixel Patch?

What is Pixel Clock and Pixel Patch?

Pixel Clock is a specific frequency (with a limitation) included in the GPU BIOS and drivers to provide compatibility with various connections, with each standard having it's own maximum supported pixel clock.

Patching the Pixel Clock allows you to remove those limitations as well as some others, and in case with AMD/ATI Pixel Clock Patch, it also allows users to remove BIOS signature check, which is what makes this utility useful for miners as it provides the ability to run modified BIOS versions on AMD GPU, which are created with optimized memory settings for better performance or specific GPU/VRAM operating frequencies presets.

AMD/ATI Pixel Patcher currently lists support with drivers from Catalyst 11.9 released back in September 2011 up to 21.4.1, released in April 2021 — newer versions are possibly supported too.

After you install the driver (we currently recommend 21.1.1 for all GPUs or 21.3.1 if you plan to use 6700XT), download the utility from this link and extract it from the archive: https://sourceforge.net/projects/amd-ati-pixel-clock-patcher/

In the opened window, press "Yes" to apply the patch and reboot after completion. 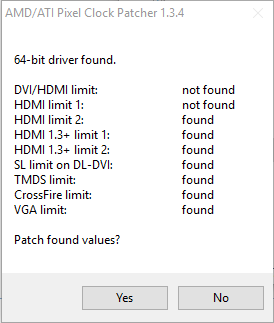 It's easy to get started and it's free

Use minerstat software and improve your mining operation