Help › Mining › How to validate hashrate?

How to validate hashrate?

To validate your hashrate you can check the hashrate reported by minerstat, the miner logs, and values on the pool. Let's explore and compare what the values reported by each of the three are and what they mean. We'll be using Ethermine as example in this article, but the process is similar with other pools.

All three hashrate reportings will be similar and you can check here what to do if they are not.

On the worker's page, and on the dashboard you can see the currency being mined, the reported hashrate, the efficiency, estimated earnings. 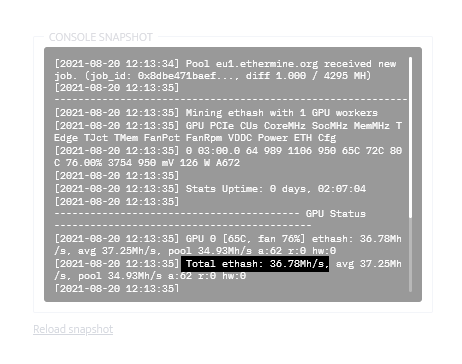 First of all, we need to open the pool website and navigate to our user's page.

With a lot of pools, minerstat provides a shortcut to the dashboard of the pool so the user can click it and see personal mining stats on the pool, depicted under the "pool" column, next to the pool address you're mining on.

The example below is a screenshot from Ethermine.

You can see on the picture three different figures reported under "Hashrate". Reported is what the mining client reports and is the same as seen in the client itself and minerstat. Current is the hashrate calculated based on the number of shares the miner submitted in the latest 15 minutes, while average is based on the shares submitted during last 24 hours.